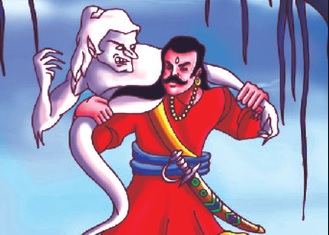 Vikram Betal (Betal Pacchhisi) is an ancient Indian story collection of a King and a Ghost. Each story has a moral and is ideal for kids. Vikramaditya the king was a great leader. Every day, a man gifts fruits to him.

A day Vikram dropped fruit and a diamond fell out. The king thanked him for it and asked him, what he wanted in return.

He told Vikram to bring Betal, a ghost on a tree to the graveyard.

The king was so brave that he went to the graveyard and pulled Betal down onto his shoulder.

As he started walking back, Betal said, “I will tell you a story and then ask a question. You must tell me the answer otherwise I will break your head. But if you speak I will fly back to the tree.” Vikram agreed.

This was the start of a series of stories Betal told Vikram, but each time Betal asked Vikram a question, Vikram answered and clever Betal flew back to the tree.