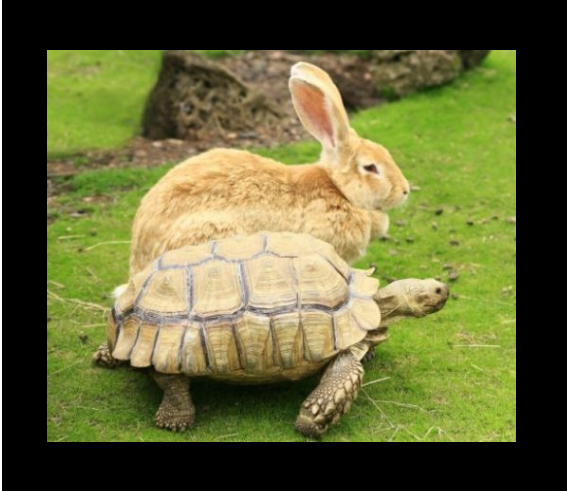 Lets Start – Tortoise and the Hare Story – Once upon a time, there was a Jungle somewhere. There were two friends – Hare(Rabbit) and Tortoise. Hare (Rabbit) was very much proud of his Speed and self obsessed with his Speed. Everyone knows that Hare (Rabbit) can run really fast, so every one praised him too. Rabbit Started feeling like King of Speed .  #Tortoise and the Hare(Rabbit) Story Continues..

One Day, he made the biggest mistake of his life. Hare (Rabbit) started teasing Tortoise and insulted him for his speed in front of entire Jungle. He teased and challenged- Slow but Steady Tortoise to have race with him. Tortoise accepted the challenge. The News of this competition got spread across the jungle like fire. Everyone in the jungle was excited to see the race. They invited Fox as a Judge for this competition.

Next Day — Everyone was on his seat to watch this race. “Ready”, “Steady” — “GO” — Said the fox. Hare (Rabbit) like always, started the race with full speed to leave Tortoise behind. He wanted to give tortoise a message that Tortoise can never win the Race with Rabbit. Soon Hare (Rabbit) was completely out of Sight. “You cannot win the race with me ever” Hare (Rabbit) screamed, and decided to take rest in between for some time and fell asleep, as he was sure that Tortoise will take time to reach. On the other hand, Tortoise kept going slowly but steadily.

#Tortoise and the Hare(Rabbit) Story Continues.. Soon, he passed the place where the Hare (Rabbit) was sleeping. Since Hare (Rabbit) was Sleeping, he couldn’t see Tortoise crossing him. Slow and Steady Tortoise kept walking. He never stopped until he reached the finish line. All the animals who were watching shouted so loudly for Tortoise, they woke up Hare, and when at last he did wake up, the Tortoise was near the goal. The Hare now ran his swiftest, but he could not overtake the Tortoise. It was too late for Hare (Rabbit). Tortoise was over the line.

#Tortoise and the Hare(Rabbit) Story Continues.. “You Will Win If you have decided to win”

Tortoise and the Hare Video | Story for Class 1 | New Version

Any cookies that may not be particularly necessary for the website to function and is used specifically to collect user personal data via analytics, ads, other embedded contents are termed as non-necessary cookies. It is mandatory to procure user consent prior to running these cookies on your website.